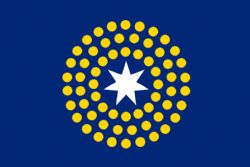 Show Designer's Description
This design will announce clearly and unmistakably our identity to the world as well as to ourselves. It will be recognised internationally and will not be confused with the flags of other nations. 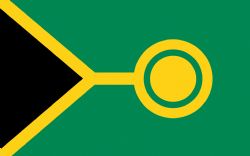 Show Designer's Description
Land, dreaming, life and unity. Our country has been about telling stories since the beginning of time. Here is our story. Here is us, united as one.

Show Designer's Description
Inspired by the Australian, Olympic, Aboriginal, & Torres Strait Islander Flags.
The coloured stars represent the world's other continents from where we have all come except for the white star that represents our presence in Antarctica.
The federation star represents Australia as a Nation Continent, showing our position in the world, as the great south land and acknowledging our states and territories.
The line between the world and Australia is Wallace's Line indicating Australia has a different ecology from the rest of the world and has been separate for 70 million years, so must be protected to preserve its agriculture and unique plants and animals.
The stars of the world are seven point stars from the southern cross, their colours come from the Aboriginal and Torres Strait Islander flags in the same way that the colours of the rings in the Olympic flag come from the flags of the countries of the world's continents, while recognizing the meaning the colours have for Australia's indigenous peoples.
White: represents peace
Black: Aboriginal & Torres Strait Islander people
Yellow: Sun giver of life & protector
Light Blue: the sea that surrounds the Torres Strait Islands
Red: represents red earth & spiritual relation to the land
Green: Land of the Torres Strait Islander People
The green & gold stars represent Australia's sporting colours and their love of sport.
The colour of the Australia Star or Federation Star is dark blue as this is the dominant colour of the whole flag with a thick boarder indicating that most of our population is restricted to within 300Km of the coast.

Show Designer's Description
A from Australia 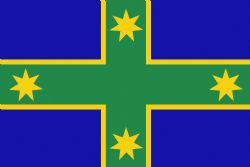 Show Designer's Description
A new flag design in blue-green and gold using a southern cross format from the Eureka flag. 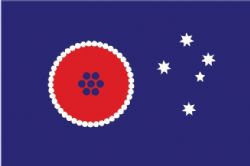 Show Designer's Description
Replacement Simplified design -
RED, WHITE & BLUE.
Australia is unique as the island-continent, the Great Southern Land.
Symbolising our island-continent is a RED earth circle, bounded by a line of WHITE dots, the coast.
In the heart of the island symbol is a star-like cluster of BLUE dots. The centre dot represents the territories, the six surrounding dots, the states.
The island-continent is girt by a sea of BLUE.
The WHITE stars of the Southern Cross are faithfully kept.

Show Designer's Description
A new flag bringing together all Australians. Red of the earth, Black of the original owners and a yellow kangaroo representing a new beginning, bringing us all together.