Blue represents Australia's past as a British colony. 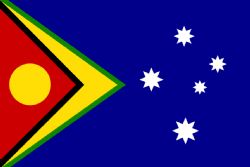 Hereby, I present you a proposal for the flag of Australia. It's a 3:2 flag. Next to the pole is the origin of Australia. Aboriginal sun over the red earth inhabited by the aboriginal people represented in black color. Next to the right, comes a yellow boomerang, the most iconic tool of Australia worldwide which also represents Australian dinamism. Yellow color represents Australian desert. Next to the right, in contrast against the desert, comes a narrower green band representing southeastern forestal territories. Green color also represents the wealth of the people and the abundance of resources in the country. The point of this band reaches exactly the middle of the width of the flag. All the right side of these V-shaped bands is in the same dark blue as current Australian flag which represents the surrounding oceans and the sky at night. Finally, the current southern cross constellation have 2 changes. All 5 stars are 8-pointed stars, each star point representing each one of the six states, plus the remaining territories, plus the aboriginal people, who culturally don't belong to any region, and also evokes stars in the eureka flag. The size of the 5 stars increases by 1 from a proportion of 5 to a proportion of 9, that is, the diameter of the larger star (9) almost doubles the diameter of the smaller star (5). These sizes evoke the different intensities of the stars in the real constellation.

P.D.: I have the svg file with the original design at your disposal.

Show Designer's Description
The design on the left is the Aboriginal symbol for walking tracks and a resting spot. I chose this because Australia is a very active country, and many places to just sit down and relax are available.
The colours are the colours of the desert, since Australia has a lot of it. And finally, the sourthern cross in all it's glory is on the right side. It just wouldn't be an Australian flag without it 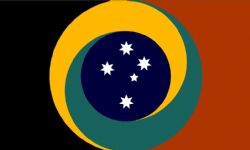 Show Designer's Description
black and red for the indigenous people, blue and white for our European heritage, green and gold for our united and prosperous future.

Show Designer's Description
The gold boomerang represents the indigenous peoples of Australia and their heritage, pointing towards a bright future into the sky and stars,
as well as resembling the continent's golden coasts, which also shows the nations abilities to preserve the beauty of the land.
The blue field represents the fact that the nation is surrounded by water, the green interior is attached hoist side to suggest that the island has a solid foundation since it is also a continent.
The stars in the blue field represent the precious wildlife in the Great Barrier Reef as well as the many islands off the coast.
The green symbolizes the diverse and unique nature of the continent.
The Federation star is a part of the southern cross to show the nation's connections to its past as well as its independence.
The stars all have one edge pointing outward from each other indicating an expanding future, as well as the largest star on the green field suggesting the wealth the land has to offer.
The white stars and the lack of the color red is to show the peaceful intentions of the nation. The red color was part of past flags and the war associated with it is left to history.
The variety of colors indicates the diversity of people, nature, resources and accomplishments in the country.
The shades of green and gold are the national colors of Australia and the blue and white are the only things remaining from the previous flag.

Show Designer's Description
The flag contains the Commonwealth star and the Southern Cross. The colours are selected and placed in an order that is significant. The blue, white, and red represents Great Britain, the first European nation to significantly colonize Australia. The red, gold, and black recalls the Aboriginal flag. The red line is larger that the white and gold since it represents "blood," more significantly the blood of all Australians which transcends race or ethnicity. It also meets in the middle of the meeting of European and Aboriginal--a common bond and the "lifeblood" of the Australian nation moving forward in the 21st century.

Show Designer's Description
The two most prominent colours are green and gold, our distinctive national colours. The gold represents our land and all its inhabitants; gold is the colour of our harsh deserts and iconic beaches, and the glaring sun that bathes them and all of us. The black ribbon represents our indigenous cultures and peoples, true owners and custodians of our land in past, present, and future. The green field represents peace, progress, and prosperity. The arching shape of the lower portion represents Australia’s people actively aspiring towards these values. It also resembles the Sydney Harbour Bridge, an iconic national landmark.
The device of the white Commonwealth Star in the dark blue circle recalls our legacy national flag and is a symbol of our Federation. With its points, the star represents all our states and territories; as a whole it represents our laws and systems of government.

Show Designer's Description
A redesign incorporating the colours of the Aboriginal Australian flag, while showing a rising sun, symbolising the dawn of equal Australian ideals. The stars in the Southern Cross have been aligned so as to lend stability to the cross that we have built our country upon.

Show Designer's Description
How could you update the Australian flag by changing it as little as possible? That is the logic behind this design. The idea is not to completely change the current flag but to upgrade by keeping most of its iconography and adding national symbology. This thinking could also result in less social and political friction in a debate to implement it. Simply replaced the Union Jack for the national colours –gold and green– while using one of its white stripes as reference. 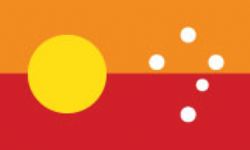 Show Designer's Description
This design is inspired in respect towards the Australian Aboriginal Flag. Red earth ground-Multi-cultural peoples atop that ground (which starts with First Peoples) all under the sun, the giver of life and protector. The colonial Southern Cross is replaced by a 'dot' version of that image. Recognition, Justice, Conciliation. 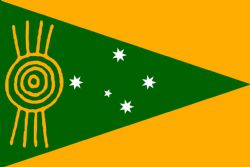 Show Designer's Description
The Aboriginal symbol means "Meeting Place". Australia is the "Meeting Place" where all Australians can gather in unity under the Southern Cross.

Show Designer's Description
With dimensions of the current flag of Australia, and the Southern Cross in the familiar place, the Union Jack is removed.
The Commonwealth Star is raised to the centre line and becomes yellow. Thus also representing the sun of the Australian Aboriginal flag.

The field is bars of four colours (green, black, red, blue) this incorporates all the colours of the current Australian flag, the Australian Aboriginal flag, and the Torres Strait Islander flag.
The multitude of colours represent the diversity and harmony of the peoples and cultures that make this nation what it is today.