We Must Fly a Flag which Says Australia is an Independent, Sovereign Nation, NOT a Colonial British Branch Office

Note: Ausflag is an apolitical, non-profit organisation seeking to secure the popular support of the Australian people for the adoption of a truly Australian flag. 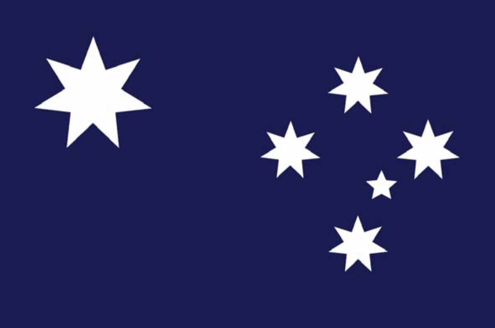 The Executive Director of Ausflag, Mr Harold Scruby said: "This new minimalist/evolutionary design is based on the "Commonwealth Star" (commonly known as the Federation Star) replacing the Union Jack. It could not be more simple. It′s a natural progression.

"The current design symbolises Great Britain dominating Australia. It depicts Australia as a British colony: A veritable British branch office. This new design puts the Australian Commonwealth in the primary position. It celebrates "egalitarianism" over "aristocracy". It celebrates "independence" over "dominance". It celebrates Australians united by a common interest.

"It′s vital we tell the world we′ve grown up.

"This campaign is not anti-British. It’s passionately pro-Australian. It’s no more anti-British than when we changed our national anthem from God Save the Queen to Advance Australia Fair. "And as to branding; placing the symbol of a major sporting and commercial competitor in the dominant position on our flag is as ludicrous as Microsoft placing an Apple logo in a dominant position on their logo and promotional material." Mr Scruby said.

Read Dr Lowitja O′Donoghue′s Article about how indigenous people feel about our flag.